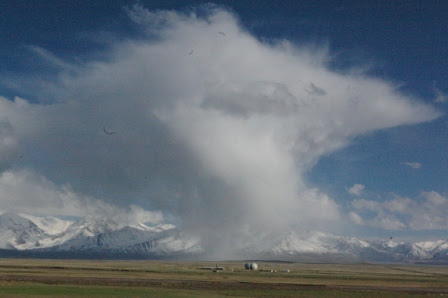 In order to reach the Tarim basin, the caravans of the Great Silk Road had a choice - to walk through the dry flats in the north-eastern part of Pamir. But this was tough choice - these weird flats had extreme weather conditions. Besides the extreme cold, hurricanes, sudden snowstorms in the middle of summer and almost constantly dusty air here very frequent are powerful dust devils similar to tornadoes.
No wonder that for centuries the ancient road was lined with corpses of dead pack-animals. Also nowadays Markansu desert (reportedly in Kyrgyz language - "creek of tornadoes" or "creek of death", also "dead water") leaves sombre feeling.

There are several reasons why Markansu valley is so specific.
One is: the valley is located 4 kilometres above the sea level. At such height in these latitudes the plant and animal life is left below in valleys and the plains are nearly lifeless.
Here should be mentioned interesting find: in 1957 archaeologist Vadim Ranov found here a 9,500 - 8,500 years old Neolithic summer settlements (the most famous is Oshkona - Ошхонa) with fireplaces where charred remnants of birch and juniper were found. Some scientists are convinced that back then Markansu valley was even 600 m lower than now (ie. it has been rising 5 - 7 cm per year) - otherwise people and trees can not live here. Tectonic movements of high speed are not uncommon in this area - but it is not proven yet that Markansu Valley really experiences fast upward rise lasting for thousands of years.
Another reason for extreme weather conditions is the following: this highland valley is surrounded by mountains - but not entirely. There is formed a singular likeness to wind tunnel: cold air masses from the Pamir Plateau are pushed through this comparatively narrow valley towards Xingjiang. Air is extremely dry - often the annual precipitation is less than 30 mm - thus Markansu Desert gets less precipitation than any other desert in Central Asia.
Markansu desert is some 30 km long and 1 - 2 km wide valley. It is flat, lifeless plain covered with thin layer of sand and pebbles and black stones below it. Plain is crossed by perennial stream - Markansu creek. For most part of the year this stream is dry or frozen. Plain contains occasional, wind polished, 20 - 30 m high hoodoos.
Valley is surrounded by bleak mountains rising some 500 m high. Sky above is unusually dark blue but the air closer to the land surface is filled with dust.
Often are forenoon the valley is silent. This is dead, depressive silence. In afternoon the wind starts. It is very strong and there is no place to hide from it. Wind rises the dust and at stronger storms it is not easy to orientate, it is hard to breathe.
The contrasting temperature of heated land surface and cold wind creates whirlwinds. Countless dust devils rise and they rise the stone shivers from the ground. Strong whirlwinds reach the strength of tornadoes and are very dangerous - there are reports about camels with all their burdens lifted by winds. People believed that these are real, fearsome spirits - jinns.
Valley is also extremely cold. Further south, in the mountains at Bulunkul there has been registered -63°C temperature - the lowest registered temperature outside the polar regions. But also in Markansu there are registered -40°C, while in summer days the sun might be scorching hot and surface heats up to 60 - 70 °C hot. Even in summer the temperature falls below zero in nights. Winter lasts here from October to April.

Local people and travelling traders considered that this valley is cursed and tried to cross it as fast as possible. Every traveller (also nowadays) reports a dreary, depressive feel of this location.
The ancient route of caravans was positioned similar to current road. Caravans often perished here and this was considered one of the most dangerous parts in the Great Silk Road. In spite of the macabre fame this valley was the simplest path to enter the Tarim basin from the west, used by caravans until early 20th century.
Danger was created exactly by the meteorological conditions. Pack-animals died here very often and at some moments of history the path was full with skeletons of these animals - mainly horses and camels, at some places forming heaps of bones. Dry and cold climate often led to mummification of corpses and preserved traces of the past tragedies for long centuries.
In 1930ies, when road was built here, these bones were removed.
Marco Polo described that here have been found numerous horns of mountain sheep. This is explained by hunting methods where herds of mountain sheep are driven to the base of steep cliffs and killed. Heads of male sheep are cut off and left here due to heavy horns. Dry and cold climate preserves them well. According to Marco Polo shepherds use these horns for their everyday needs - as bowls, dishes and even as building material for enclosures of their herds.
More appaling is another find - a group of dead mountain sheep and not far from them - several dead wolves. Who knows why these animals perished - but death came fast and unexpected.
As if nature hasn't tried hard enough to create sombre landscape, Markansu valley is crossed by a kind of "Great Anti-Chinese Wall" built by the Soviet Union in 1960ies. This is long fence stretching through Central Asia till Mongolia and built in period when Soviet - Chinese relations were strained. This fence has signalisation and border guards (in other regions, where is more life) have enough work while checking false alarms created by animals.

See Markansu desert - Valley of Tornadoes on the map of Tajikistan!

Markansu Desert - Valley of Tornadoes is included in the following list: